Harvesting and sowing seeds are activities as old as civilisation. Innovative products and technologies add value to these ancient practices, and bring new opportunities to New Zealand livestock farmers.

Endophyte developments have been a major focus for Grasslanz Technology in recent years. Research undertaken by AgResearch (Grasslanz Technology’s parent company) in the endophyte area is world leading, and the technology has provided millions of dollars of benefit to New Zealand primary industries since the release of the novel endophyte AR1 in 2000. The research for the development of AR1 was a major team effort by mycologists, chemists, agronomists, entomologists and plant breeders. Research into the identification, understanding, testing and commercialisation of an endophyte strain takes the best part of 20 years.

The endophyte programme undertaken by Grasslanz Technology and AgResearch goes through a number of key stages. Endophytes have been isolated from grasses collected from around the world. They are identified and classified, and over the years a picture has developed as to how individual endophyte strains are related to one another. Once an endophyte strain is identified, the spectrum of chemical compounds it produces is determined, along with the impact these have on insects. Endophyte strains with a good range of insect tolerance are agronomically evaluated in a number of environments and various management styles. Endophytes that are agronomically as good or superior to standard (common toxic) endophytes are then subjected to intensive animal safety and performance testing. To be commercialised novel endophyte strains need to be superior to standard endophytes in these aspects of testing.

The final process is to develop seed production, processing, prolonged storage, and quality assurance systems. This is to ensure that the correct and a viable endophyte can be delivered to the farmer. It is important to remember that endophytes are a perishable product and a lot of care is required at the seed production, processing, and storage phases to ensure farmers actually receive the novel endophytes they purchase in their seed on their farms.

What is an endophyte?

Endophyte is a naturally occurring fungus whose complete life cycle occurs within grasses such as perennial ryegrass and tall fescue. Most New Zealand ryegrass pastures are infected with endophyte. The endophyte fungus grows between the cells of the host plant, drawing nutrients from it but in return conferring resistance to insect pests, drought tolerance, and protection from overgrazing. Such a mutually beneficial relationship is known as symbiosis. Endophytes produce chemical compounds known as alkaloids, which confer pasture pest resistance, but which can also cause animal health problems. Peramine deters in particular feeding and egg laying of Argentine Stem Weevil, but has no known effects on animal health. LolitremB deter Argentine Stem Weevil larval feeding but cause Ryegrass Staggers. Ergovaline gives resistance to Black Beetle, but causes heat stress, especially in warm humid conditions 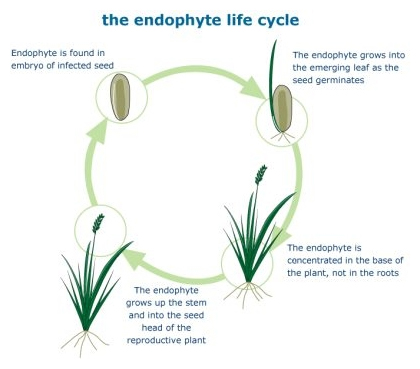 Endophyte strains commonly present in New Zealand ryegrass pastures contain the compounds lolitrems, peramines and ergovalines. The selected strain, ‘AR1’, contains peramine which gives tolerance to Argentine stem weevil and some tolerance to black beetle when plants are well established. AR1 does not contain lolitrem or ergovaline so that there is enhanced animal performance. Endo 5 contains peramine but no lolitrems. They do contain some level of ergovaline which allows for agronomic robustness, especially in areas where black beetle is an issue.

The most recent novel endophyte, ‘AR37’, does not contain lolitrems, peramine, or ergovaline, but does have a unique group of compounds called epoxy-janthitrems. Epoxy-janthitrems confer protection against a wide range of insect pests (Argentine stem weevil, black beetle, root aphid, pasture mealy bug and porina). A point of note is that AR37 controls the Black Beetle lifecycle at the adult stage rather than at the larval stage. Testing to date has shown ryegrass infected with AR37 to be more persistent and productive than pastures infected with standard endophyte, with livestock performance levels similar to AR1 and nil endophyte. While AR37 does not produce the alkaloid LolitremB it can cause ryegrass staggers in grazing livestock. In grazing trials at Lincoln the incidence of ryegrass staggers on pure ryegrass with AR37 has been less frequent and usually only half as severe as on ryegrass with standard endophyte. However, these trials have shown than spasmodically AR37 can cause serious staggers (Fletcher & Sutherland 2009: Proc NZGrassland Assn, 71: 127-33. However, to date no ryegrass staggers have been reported on any class of cattle on AR37 in trials or on commercial farms. Due to the fact that no trial work has been undertaken on deer and horses, pastures with AR37 are currently not recommended for those livestock classes or other untested species.

Novel endophytes are protected by patents
The development of novel endophytes is an expensive process over a long period of time, and they do offer farmers significant agronomic advantages and subsequent economic benefits. Due to these factors Grasslanz Technology and AgResearch have obtained Intellectual property protection in the form of patents.

These ratings are indicative and may vary slightly between cultivars.  If Argentine stem weevil or Black beetle are present at sowing, an appropriate seed treatment is recommended, to improve insect resistance during establishment.

² AR1 plants are more susceptible to root aphid than plants without endophyte.

These ratings are indicative.  Animal performance and health can vary under different management systems between seasons.

The information in this table is based on animal safety trialling protocols dedsigned to expose animals to simulated worst-case scenario managment.  This involves forcing them to graze deep into the base of pur perennial ryegrass pastures that have been allowed to grow for several weeks over late spring/summer (similar to a hay crop) where they will encounter the highest concentrations of harmful endophyte chemicals if these are present.

This management does not represent normal farm practice although similar situations may arise on farms in rare circumstances.  Under normal farm grazing practices, the contribution of basal pasture material to total animal dry matter intake is relatively low and therefore the intake of harmful chemicals (if they are present) is diluted.  Thus, the likelihood of adverse effects on animals is reduced, but the potential for problems to occur may still exist if the endophyte brand is rated > 4-star for 'freedom from staggers' and/or there are comments on animal performance which flag potential issues.

Comments on animal performance have been moderated based on information from other trials (in addition to the formal animal safety testing protocols), consideration of the 'normal' grazing management practices implemented on farm (see previous paragraph), and recognition that animal diets are very seldom pure ryegrass.  Other dietary components such as clovers or non-ryegrass grass species, crops or supplements will dilute the intake of endophyte alkaloids.