Work on endophytic fungi, which enhance the productivity of pasture grasses, is being adapted to cereals to see if the mutualistic relationship can improve the tolerance of cereals to pests and drought

New Zealand researchers are translating their successes with endophytes in pasture species to wheat in expectation that the mutually beneficial relationship could improve wheat resilience in the face of pests and climatic pressures. 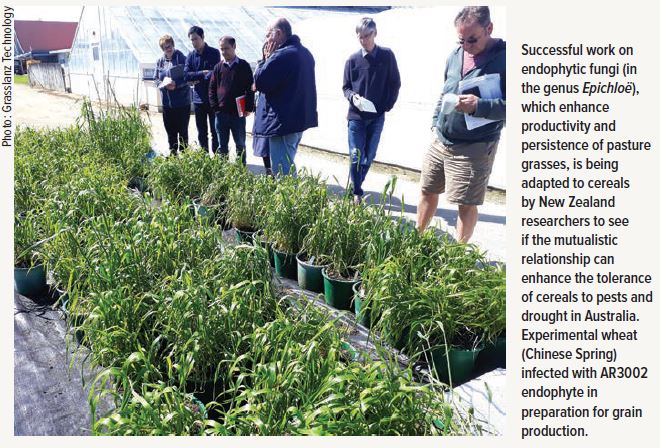 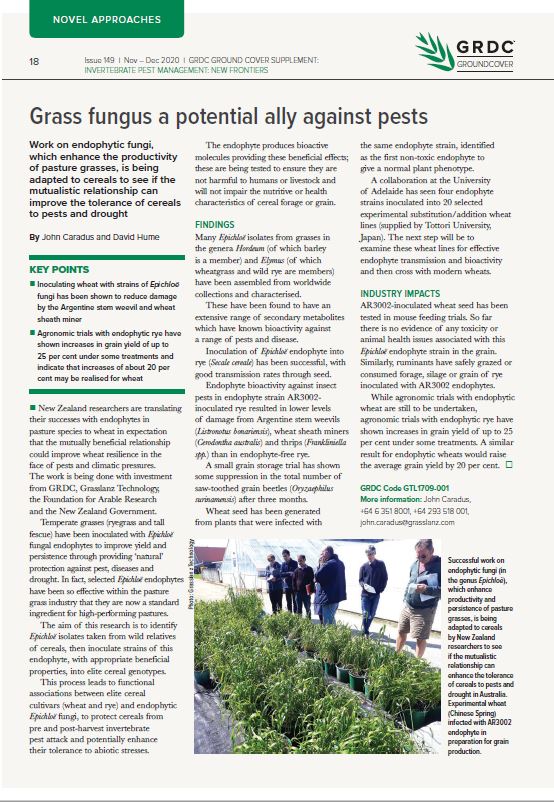 The work is being done with investment from GRDC, Grasslanz Technology, the Foundation for Arable Research and the New Zealand Government.

Temperate grasses (ryegrass and tall fescue) have been inoculated with Epichloë fungal endophytes to improve yield and persistence through providing ‘natural’ protection against pest, diseases and drought. In fact, selected Epichloë endophytes have been so effective within the pasture grass industry that they are now a standard ingredient for high-performing pastures.

The aim of this research is to identify Epichloë isolates taken from wild relatives of cereals, then inoculate strains of this endophyte, with appropriate beneficial properties, into elite cereal genotypes.

This process leads to functional associations between elite cereal cultivars (wheat and rye) and endophytic Epichloë fungi, to protect cereals from pre and post-harvest invertebrate pest attack and potentially enhance their tolerance to abiotic stresses.

The endophyte produces bioactive molecules providing these beneficial effects; these are being tested to ensure they are not harmful to humans or livestock and will not impair the nutritive or health characteristics of cereal forage or grain.

Many Epichloë isolates from grasses in the genera Hordeum (of which barley is a member) and Elymus (of which wheatgrass and wild rye are members) have been assembled from worldwide collections and characterised. These have been found to have an extensive range of secondary metabolites which have known bioactivity against a range of pests and disease.

A small grain storage trial has shown some suppression in the total number of saw-toothed grain beetles (Oryzaephilus surinamensis) after three months. Wheat seed has been generated from plants that were infected with the same endophyte strain, identified as the first non-toxic endophyte to give a normal plant phenotype.

A collaboration at the University of Adelaide has seen four endophyte strains inoculated into 20 selected experimental substitution/addition wheat lines (supplied by Tottori University, Japan). The next step will be to examine these wheat lines for effective endophyte transmission and bioactivity and then cross with modern wheats.

AR3002-inoculated wheat seed has been tested in mouse feeding trials. So far there is no evidence of any toxicity or animal health issues associated with this Epichloë endophyte strain in the grain. Similarly, ruminants have safely grazed or consumed forage, silage or grain of rye inoculated with AR3002 endophytes.

This email address is being protected from spambots. You need JavaScript enabled to view it.