Dr John Caradus FRSNZ (CEO Grasslanz) has been awarded the Thomson Medal by Royal Society Te Apārangi for his leadership in the commercial delivery of plant and microbial technologies to farmers from both publicly and privately funded research, and for improving pastoral sector productivity.

John has spent his whole career focused on improving the value of grasslands for New Zealand farmers. This started with him successfully applying for a forage plant breeding position at DSIR Grasslands. He completed a PhD at the University of Reading (UK) and with the establishment of AgResearch in 1992 he became the Team Leader of the white clover breeding team. 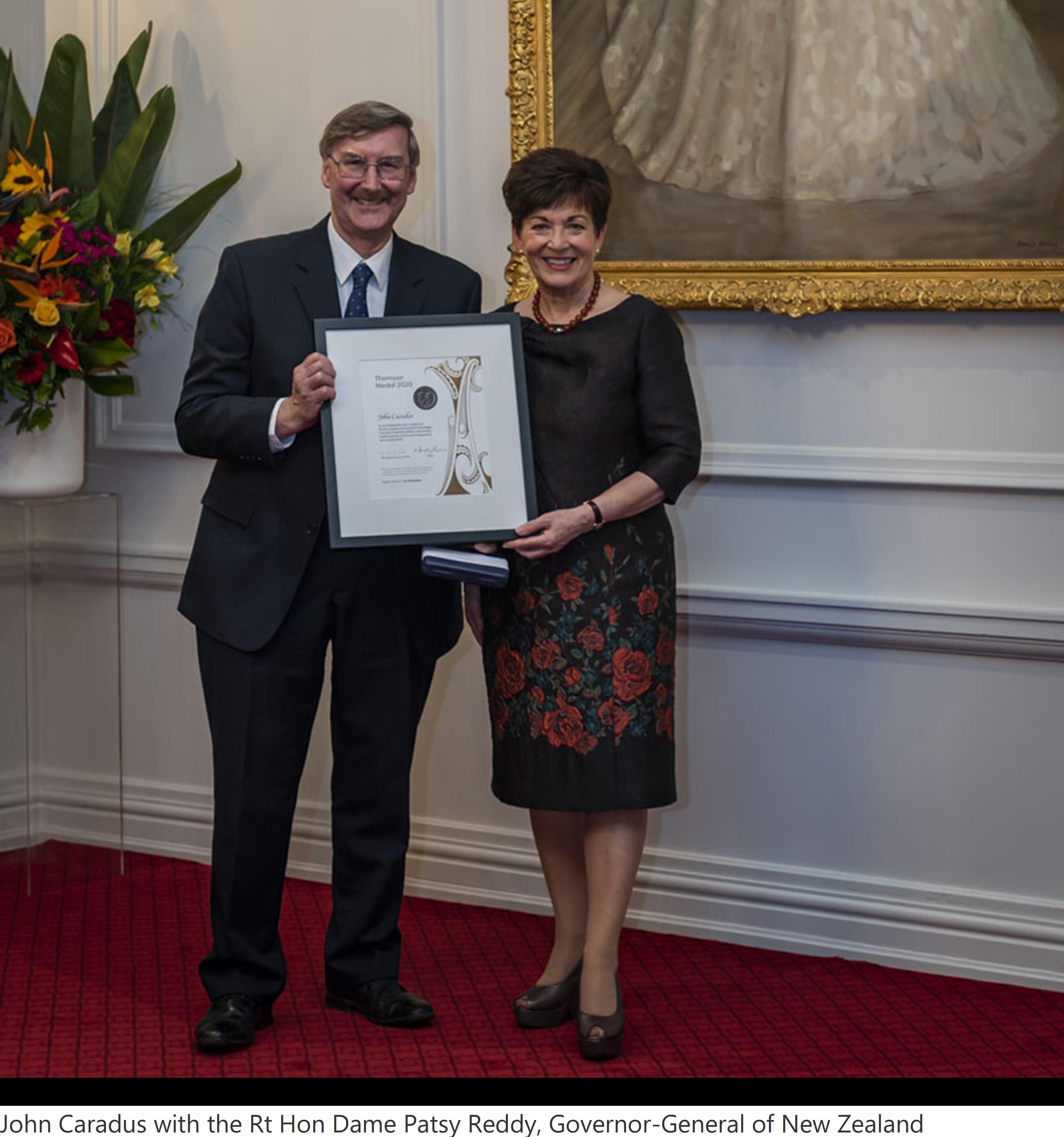 He later became a Science Group Leader and then Science General Manager, before leaving AgResearch and moving to Dexcel (now DairyNZ) as CEO in 2003. John was appointed CEO of Grasslanz Technology in 2006, allowing him to combine his strong research background with the opportunity to direct R&D investment in developing research outputs and ensuring that they are commercially delivered as technologies that can be used by farmers.

As a plant breeder he was involved in developing 16 white clover cultivars. More recently he has become recognised for his understanding of the area of Epichloë grass endophytes, a fungal symbiotic partner of grass that can protect it from insect pests.

He was part of the team led by Dr David Hume, AgResearch, that was awarded the 2018 Pickering Medal by Royal Society Te Apārangi for work to discover, patent and commercialise the novel rye grass endophyte AR37. The endophyte provides ryegrass with high levels of protection against insect pests while maintaining the health and productivity of grazing animals, resulting in large gains in farming productivity. John led the commercialisation of this endophyte. It has been estimated that the use of AR37 endophyte in New Zealand will have contributed NZ$3.6 billion to the economy through the life of its patent.

John is a prolific writer with over 250 science publications, with over 100 of these being in national or internationally peer reviewed journals.

“Thanks to Royal Society Te Apārangi for this acknowledgement. However, one rarely lives or works in a vacuum and so a big thanks must go to my current and previous employers for giving me the opportunity to lead and undertake roles that have given me immense satisfaction. Working in the New Zealand agricultural research community has been a real privilege.

“Taking research outputs through to commercial delivery has its challenges but when successful provides significant satisfaction. To lead effectively one must have great staff and colleagues, and I have been fortunate to have worked with many great people in the primary sector community.

“But the biggest thanks must go to my family who have allowed me to undertake these leadership roles and allowed me the time and space to do that. Thank you.”

John has received several honours for his grassland research and associated technology transfer He has been elected a Fellow of Royal Society Te Apārangi (RSNZ), an Honorary Fellow of the NZ Institute Agricultural Science (NZIAS), a Fellow of the Agronomy Society NZ and a Life Member of the NZ Grassland Association (NZGA). John is a Past-President of the NZGA, NZIAS, and the NZ Plant Breeding and Research Association. He has been a member of the Royal Society Te Apārangi Council. John is a trustee of the NZ Grassland Trust, the Kathleen Spragg Agricultural Research Trust, the House of Science Central Waikato, and a director of FAR. He is a member of the NZ Institute of Directors and has been invited to participate in a number of advisory roles during his career.

For outstanding contributions to the organisation, support and application of science or technology or humanities in New Zealand.