Peter McNab in South Otago is very encouraged by what he’s seen of the ability of AR37 to protect hill country pastures from Porina. 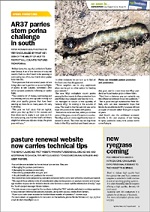 McNab farms the 2150 ha Lochindorb Station near Owaka. A lot of it is the kind of rocky hill country that you don’t want to be praying or oversowing too often, but that is what porina force him into.

“Even pastures that are several years old are being taken out in patches or worse by flights of porina in late autumn, sometimes after we’ve sprayed paddocks following an earlier flight.

“You spend a lot of money oversowing and topdressing and you end up with nothing but older poor quality grasses that have been seeding up there for so many years. It’s very frustrating.

“This year we had cases that are typical, where you shut up feed in the autumn and then when you’re ready to put cows on it in the early spring, you find the feed’s still there alright but when you slip on a slope, the grass goes with you.”

In other instances he can turn up to find all the feed cover has disappeared. “These surprises can be very unpleasant when you’ve got no other option for feeding your animals.”

The new AR37 endophyte counts porina among the five insects it offers protection from and McNab was naturally very keen to try it. He managed to secure a trial quantity of Samson AR37 for sowing in the autumn of 2004. The result is that he can now see some hope of success in his battle with porina.

“Indications so far are that, while you do lose some of the grass, most of it seems to survive. The AR37 pasture seems significantly more resistant to attack. The other day we dug three holes in the AR37 paddock and found one porina grub, and in a next-door non-AR37 paddock we found twelve grubs in three holes.

“And from a distance you can certainly see the difference between those two paddocks.” This is good enough evidence for Peter Mc- Nab, who can now reasonably hope that blocks he establishes in AR37 pasture will last a couple of decade rather than just a couple of years.

And there’s also the additional economic benefit, in his case anyway, of not having to spray paddocks every time porina moths come flying in.