Waikato dairy farmers David and Raewyn Bennett say perennial ryegrass commando with AR37 endophyte has proved by far the best technological advance they were offered during the walton farm project in 2006. 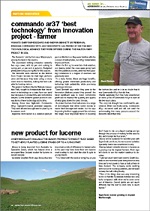 The Bennetts’ 286 ha farm near Matamata is among the best in the country.

The year-round milking enterprise currently has 1150 cows, with 60 per cent calving in spring and 40 per cent in autumn. Budgeted production is 650,000 kg MS for this season. The Bennetts were selected as the Walton Farm Project farmers for their high performance and because they were using a rotary shed close to Hamilton, making the farm suitable for hosting visitors.

The project, facilitated by the Waikato Innovation Park, sought to demonstrate that investment in technology on a dairy farm can yield real increases in productivity and bottom-line returns. So the Bennetts gained access to various items of new technology at the time.

Among those was Agricom’s Commando AR37 high-performance perennial ryegrass. They were allowed enough seed to plant 15 ha in autumn 2006.

Argentine stem weevil is a common pasture pest on this farm so they were familiar with the concept of endophytes, but AR37 immediately impressed them.

When the first 15 ha went into their rotation, son Jeremy noted the cows were going back into the paddocks sooner, and they were grazing Commando to a degree of evenness not previously seen.

To a dairy farmer, these are huge benefits, offering greater immediate productivity and indicating high palatability while promising greater persistence.

David Bennett says while they were in the Innovation Waikato project they proved the most significant way to boost bottom-line profit was to improve the quantity and quality of what goes down the cows’ throats.

As project farmers they had access to a range of technologies that either saved money or made herd management easier, but he says improving the feed supply proved far and away the single most important factor in boosting the bottom line and he is in no doubt that it was Commando AR37 that did that. Hardly surprising that they have established an extra 40 ha of Commando AR37 in each of the two years since.

The 2007/08 drought has confirmed its persistence. When rain finally came, Commando AR37 recovered well and did not need the undersowing that many pastures around the Bennetts did at that time.